What are the sulfonylurea herbicides?

General housework for the sulfonylurea herbicides.

As a rule there are two major negatives from this group:

The table below shows the tolerance of warm- and cool-season grasses to sulfonylurea herbicides.

General: This is used to control weedy cool-season grasses and crowsfoot in couchgrass.

Tolerant Turfgrasses: Apply to couchgrass (common and hybrid couchgrass) and Zoysia grass only. Do not apply to Queensland Blue Couch, Centipedegrass, and cool-season grasses, such as fescues, ryegrasses, bentgrasses, and bluegrasses.

Use Pattern: Foramsulfuron can be used to control Poa spp., crowsfoot, ryegrass, and intolerant warm-season turfgrasses. It is also effective for the removal of “clump” fescue and ryegrass and also as a spring transition aid in overseeded couchgrass.

Overseeding Restriction:  Ryegrass can be overseeded after one week whereas sprigging of couch grass should be left for two weeks after application.

Usage: No irrigation or rainfall for 2 hours after application ensures the best results. Consequently, allow foramsulfuron to dry before allowing traffic avoids damage to susceptible cool-season turfgrasses. Unfortunately, tracking can also occur after morning dew the day following treatment. So irrigate the morning after application and for increased safety leave a 3-meter buffer area around creeping bentgrass areas.

Weeds Controlled: Foramsulfuron provides excellent control (>90%) of many troublesome cool-season grass species such as Poa annua, ryegrass, and clump fescue.  Finally, it is quite effective for the post-emergent control of crowsfoot.

The image below shows tracking of Tribute on a mixed Poa/bentgrass green. 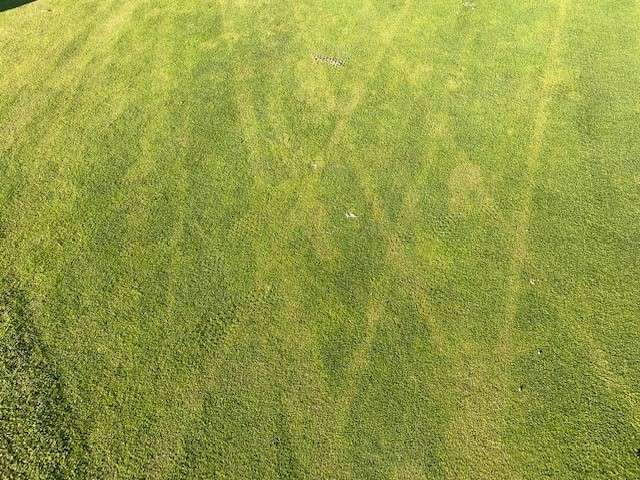 General: For the control of yellow and purple nutsedge and Mullumbimby couch.

Tolerant Turfgrasses: All cool and warm season grasses are tolerant to halosulfuron applications.

Target weeds: This is used mainly to control sedges (Cyperus spp.). It is most effective when sedge plants are between the 3 and 8 leaf stages. Also, repeat applications, 6 to 10 weeks apart, are often required to control dense infestations. Finally, no more than a total of 200g/Ha is recommended per season.

Usage: Halosulfuron is rainfast after 3 hours, with best results occurring, when no rainfall or irrigation occurs within 4 hours of application. After 7 – 10 days the first symptoms of the herbicide working can be seen. The full effects are generally apparent after 4-6 weeks. Appy with a non-ionic surfactant at 20ml/10L to ensure uptake.

Weeds Controlled: 80 to 100% control of yellow and purple nutsedge can be achieved, dependent on weed size and age. Moreover, purple nutsedge is generally considered to be more sensitive to halosulfuron than yellow nutsedge.

General: Control of Poa annua before overseeding couchgrass and also as a spring transition aid in overseeded couchgrass.

Use Pattern: Rimsulfuron may be applied on sod farms, professional sports fields, and golf courses and is absorbed by both plant roots and foliage. Irrigation 1 hour after application will move the herbicide into the soil and further increase herbicidal effectiveness. When irrigating, care must be used to prevent surface runoff as rimsulfuron can move laterally with water. Consequently, extreme caution must be exercised when applying rimsulfuron near, or on slopes that drain onto, cool-season grasses. Ideally, short, frequent, irrigation cycles are most effective to incorporate rimsulfuron without producing runoff. Lastly, although tracking and runoff seldom result in the death of bentgrass, off-colour, and growth reduction can persist for 14 days, or longer, depending on weather and fertility.

Overseeding Restriction:  Oversowing with cool-season turfgrasses should be delayed for 10 days after herbicide application.

General: Trifloxysulfuron is used for broadleaf weed, sedge, and Poa annua control in couchgrass or as a transition aid for removing overseeded ryegrass.

Use Pattern: Trifloxysulfuron may be applied on golf courses, sod farms, and other non-residential sites. On newly established turfgrasses trifloxysulfuron applications should be delayed until 100% ground cover, and a 50mm root depth is achieved.

Use: If necessary repeat applications are often needed for control of particularly troublesome weeds such as sedges and tall fescue, 4 to 6 weeks after the first application. Last of all, do not exceed an annual application total of 113g/Ha per year. Trifloxysulfuron being rainfast within 3 hours of application.

Use Pattern: Growth immediately slows within the first few days after application coupled with the appearance of chlorotic patches. Later on slow-shoot necrosis occurs. Lastly, plants will be completely killed 4 to 6 weeks after application under good growing conditions. Iodosulfuron can be transferred or ‘tracked’, so to minimize this risk, irrigate treated areas after application, and allow at least 4 hours for chemical uptake. Application to very dry sandy soils followed by soaking rainfall and also to highly alkaline soils (soil pH >8.5) may also cause turf damage.

Iodosulfuron is mainly a foliar herbicide with less activity via the soil. Consequently, it is recommended to use a water rate of 200-500 L/ha

Use: If the tank water pH is less than 5.5 raise the water pH to 7.0 and do not mix with acid-forming compounds. Being a Group 2 herbicide do not make more than one application in a season except for Bahiagrass. Lastly, always apply with a non-ionic surfactant or Hasten® at the recommended rate on the surfactant product label

Use Pattern: Negate® is both shoot and root absorbed, being rainfast with 4 hours. Initially Negate® is absorbed through the foliage of plants and then rapidly inhibits the growth of susceptible weeds. After 1-3 weeks, leaves of susceptible plants appear chlorotic, and subsequently die. In warm, moist conditions, herbicide symptoms are accelerated; conversely, in cold, dry conditions, herbicide symptoms are delayed.

Use: The Negate® product label states that annual ryegrass may need treating again after 4 to 6 weeks.

Use Pattern: Bispyribac-sodium is primarily root absorbed and then translocated to the shoots.

Summary of the sulfonylurea herbicides in the turf industry.

Finally, all of the SU herbicides have the same mode of action as they are categorized as being in Group 2. Certain weed species have naturally-occurring biotypes that are resistant to these herbicides. Consequently, their continued use, while not rotating to herbicides with a different mechanism of action can lead to the development of sulfonylurea-resistant resistant weeds.

The information is provided by Gilba Solutions Pty Ltd and while we endeavour to keep the information up to date and correct, we make no representations or warranties of any kind, express or implied, about the completeness, accuracy, reliability, suitability or availability with respect to the website or the information.