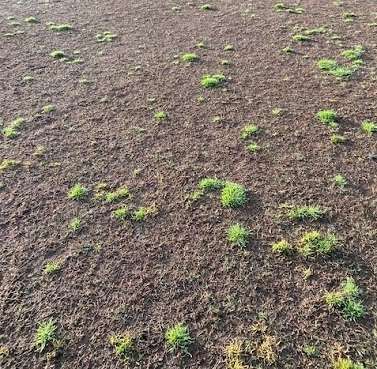 Here are 7 reasons for pre-emergent failure. A question we are often asked, is why am I having problems with using pre-emergents herbicides? Timing is the obvious reason but there could be a number of other causes. Obviously, the incessant rain and flooding/saturated ground in Sydney and QLD will be playing a major role in this.

1. Is it too late to apply a pre-emergent herbicide when I can see weeds?

In 99% of cases, apply pre-emergent herbicides before weed seeds germinate. Application after this and they won’t work.

Knowing what your target weeds are is key to successful treatment. Perennial weeds such as buckhorn plantain and dandelion typically germinate in the late autumn or early spring. Winter annuals include speedwells, common chickweed, henbit and bittercress.

2. How do I know what weed to control?

Not all pre-emergent herbicides are effective against the same weed so if you don’t know what you are targeting how can you expect to control the weed properly? The Gilba Solutions turf weed guide will help you identify your weeds correctly.

3. If it rains heavily after I apply my pre-emergent herbicide, will it still work?

Heavy rain shortly after applying pre-emergent herbicides can move them out of the target zone. This is especially likely in high sand rootzones. Pre-emergent herbicides work by staying in the top layer of the rootzone to suppress weed emergence. If heavy rainfall is expected in the season, turf managers should consider split applications if the label allows it.

The water solubility of a pre-emergent herbicide impacts its leaching potential after rainfall. Leaching occurs when the herbicide dissolves in water and moves down through the soil profile. A good example of this is metolachlor (Pennmag® or Meteor®), which is relatively highly soluble in water. Under heavy rainfall this moves more quickly from the coarse-textured (such as sandy) soils under heavy rainfall. In contrast, pendimethalin is relatively immobile in the soil.

4. I’ve been using the same pre-emergent herbicide for years but it doesn’t seem to work anymore.

Repeatedly using the same chemical group can help with the development of herbicide resistance. In the Australian turf market the majority of the pre-emergent herbicides used are in the dinitroaniline (DNA) family, including Battalia® (pendimethalin), Dimension® (dithiopyr) and Barricade® (prodiamine). Exceptions to this are Echelon Duo® (oxadiazon), Specticle® (indaziflam) and Pennmag® (metalochlor). Bear in mind that US work in 2018 shows that 58% of winter grass had some degree of herbicide resistance to prodiamine.

5. What is the best timing for my pre-emergent herbicide application?

Spring Pre-Emergents. Best apply when the soil temperature has been at 12℃ for 2–3 days.

Autumn Pre-Emergents. Apply when soil temperatures fall to 21℃ for 2–3 days.

6. Do I have to water in my pre-emergent herbicide immediately?

Granular pre-emergent herbicides do not need to be immediately watered in. However, most products work best with at least a 6mm of water within 2–3 days.

Liquid pre-emergent herbicides need to be watered in to reach the soil. However, with some of these there is some degree of leeway. For example. Specticle® has a 21 day window for watering in.

7. I have been using humic acid. Can this affect my pre-emergent herbicide?

Using certain products in conjunction with pre-emergent herbicides such as Barricade® or Specticle® could in fact be reducing the degree of control that you achieve. Let me explain further.

Both soil type and organic matter influence pre-emergent behaviour. For example work by Tielen in 2010, has shown that higher organic matter content results in a lower herbicide efficacy for Frontier (dimethenamid-P) for three weed species (chickweed, groundsel and smooth crabgrass). This was most likely due to organic matter content and its influence on soil sorption. Sorption is based on factors such as the amount and quality of soil organic carbon, texture, pH, and soil moisture

As some products marketed in Australia contain activated charcoal or are marketed as fertilizers coated with an organic material. This raises a question. Can these reduce the performance of pre-emergent herbicides? This includes products like prodiamine (Barricade®), indazaflam (Specticle®) and oxadiazon (Oxafert®)?

One such product is Humic DG®. To quote ”contains highly oxidized carbon and organic acids that, in close association with certain classes of pre-emergent herbicides, may interfere with their efficacy. These results show that the application rate of herbicides should be adjusted to account for within-field variation in soil organic matter”.

Another example is Carbon Trader®, which is a water-dispersible granule of activated carbon and often used to colour up turf areas.

The question below isn’t one of the 7 reasons for pre-emergent failure!

I’m planning to core aerate after applying my pre-emergent herbicide. Is this a problem?

While most herbicide labels do not recommend aeration after pre-emergent herbicide application, research has not shown any detrimental effect on summer grass control.

As a general rule though if the site requires aeration then you should carry it out.