Dealing with turf in shade. 15

In dealing with turf in shade the management principles are the same for both unless your going to splash the cash for turf grow lights or turf fans. Shade results in a reduction in both light quantity and quality and can be an issue for both professional turf managers and home lawn owners.

The effects of shade on turf.

When turf is subjected to shade it limits photosynthesis and carbohydrate production. Shaded areas also tend to suffer from limited air movement which increases the tendency for disease. Moss issues are also likely to increase as areas in shade tend to stay damper.

This lack of light results in the turf stretching out as it looks to find light (etoliation). This results in the grass becoming lighter in colour as this stretching means cell walls become thinner and weaker and more susceptible to wear etc.

How to manage turf in shade.

Dealing with shade by removing what’s causing it.

If you suspect that you have a shade issue the first step with dealing with it is identifying if this is the case and what is causing it. We have had great results by using the Sun Seeker app which not only identifies what’s causing the issue but gives a good indication of how to deal with it.

Obviously if the cause is a grandstand or the wall of a building this is not feasible. However, if shade is being caused by trees or shrubs you can potentially thin these out or remove them. The Sun Seeker app allows you to identify what the cause is and at what time of day.

Pruning branches below 3-4 metres can make a massive difference and improve the amount of morning and afternoon sunlight. Thinning the tree canopy will also improve the “quality” of the light that reaches the turf surface.

Quality of light under shade.

The quality of light and how it impacts on turf is discussed in more detail in “Using light“.

In the graphs below the x-axis represent the wavelengths of light from 300-900 nm, and the y-axis indicates the quantity of the wavelength of light.  When looking at wavelengths between 400 – 700 nm (between the red lines), we can also see that the amount of far-red light (area above red arrow) is similar to the amounts of visible light under natural sunlight, or even in slightly less quantity.  For plant growth, poor light quality is generally defined by light that has a lower proportion of red light to far-red light, and this is because plants specifically “see” and respond to the ratio of red to far-red light. 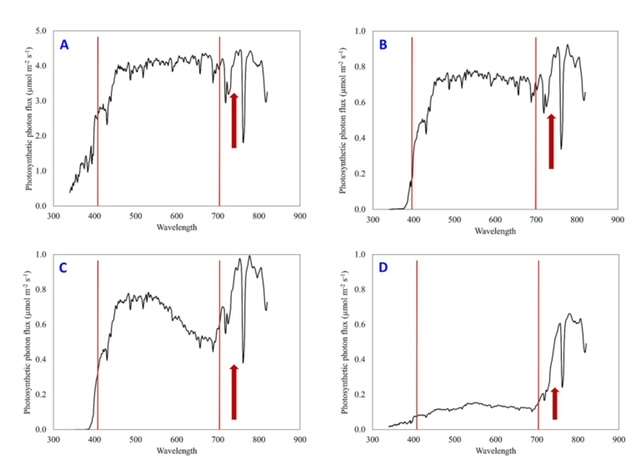 Grasses have varying abilities to grow in shade. As a general rule warm season turf needs more light than cool season turf as warm-season turfgrass varieties require two or more times the amount of light as cool-season varieties. Light requirements are further complicated by the fact that different cultivars can vary in their light requirements. For example all couch cultivars don’t require the same amount of light.

Creeping red fescue has the highest shade tolerance but all the fine-leaf fescues including hard fescue and Chewings fescue are adapted to dry, shaded conditions. If the soil is moister other options include rough bluegrass (Poa trivialis).

Firstly, warm Season grasses like Kikuyu and Couch are NOT shade tolerant. A considerable amount of work has been done quantifying turfgrass light requirements which is summarised below.

A general rule is to reduce the full sun Fertilizer rate by 50% for areas in shade. Too much nitrogen results in soft succulent growth

Raise the height of cut.

Bunnell and McCarty (2004) have shown that a 50-percent increase of mowing height (from 1/8 inch to 3/16 inch) can increase the quality of TifEagle Bermudagrass greens significantly.

Dealing with turf in shade by reducing irrigation.

As roots become a shortened a light and frequent irrigation regime should be adopted.

Dealing with turf in shade by using Trinexapac-ethyl (Amigo 120) will counteract some of the negative effects of shade by increasing plant density and decreasing plant shoot etiolation.