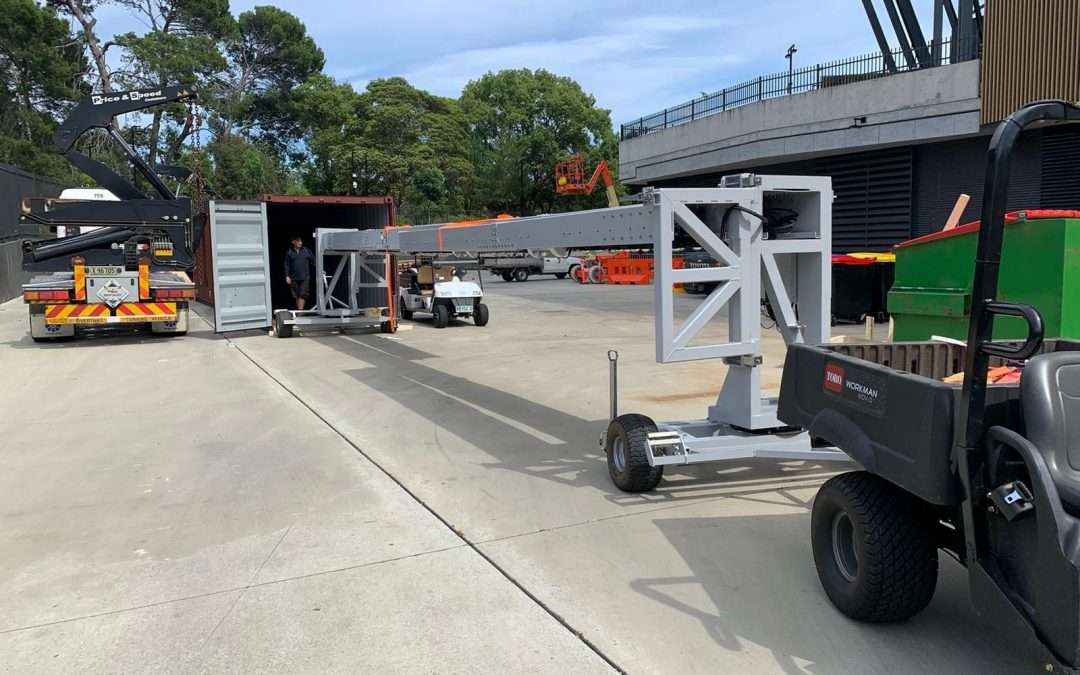 In April of 2021, Comm Bank Stadium became the first Australian stadium to begin using LED grow lights. SeeGrow LED grow light technology enables turf managers to have a climate-controlled environment with a carbon dioxide canopy to get the best possible growth and recovery from their turf. Turf managers are increasingly using this technology as modern stadium design is resulting in increasing levels of shade. Using traditional turf management practices there is a limit to how much shade turfgrass can tolerate.

The introduction of these is a game changer, and has lead to lower turf replacement costs and the production of better surfaces. Besides having significantly lower running costs in comparison to HPS light rigs, the results have been nothing short of amazing as shown in the images below which were all taken after 24-48 hours.

Use of these turf grow lights means turf managers are better able to cope with turf in shade: 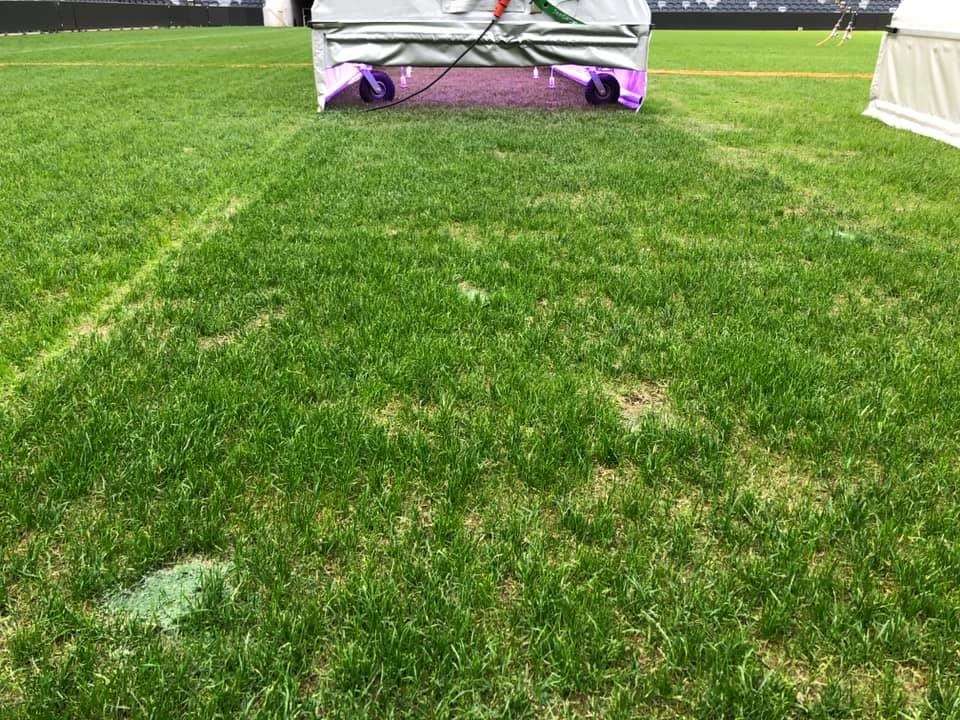 Since their invention in the early 1700s, High-Intensity Discharge (HID) lights have become the dominant technology in turf grow lights. These lights put out huge amounts of light and their spectrum is close enough to the sun to promote plant growth.

However, LEDs are well-positioned to take over the leading role in this market. HID bulbs are categorized based on the gas that is used in them. The two main types are high-pressure sodium (HPS) and metal halide (MH) lights. The type of gas used in the bulb determines the colour spectrum and wavelength. Typically, HPS lights are used in the SGL and MLR turf grow lights (http://sglconcept.com  https://mlrsports.com ) found at the MCG, and Accord Stadium are more towards the red and orange hue. In contrast an MH bulb produces a blueish color, which is useful for the vegetative phase.

LED turf grow lights are manufactured by SeeGrow® Developments. Outstanding results are achieved with up to 10mm growth or leaf and root in 24 hours. SeeGrow utilize a light spectrum that is tailored to meet the specific needs of turf, so these are turf grow lights rather than simply retro-fitted horticultural lights.

One of the main advantages of LED over HPS and MH lights is the adjustable spectrum. They are now in use at Manchester City, Juventus, The San Siro, Tokyo Stadium, Chelsea FC, and Wembley Stadium. 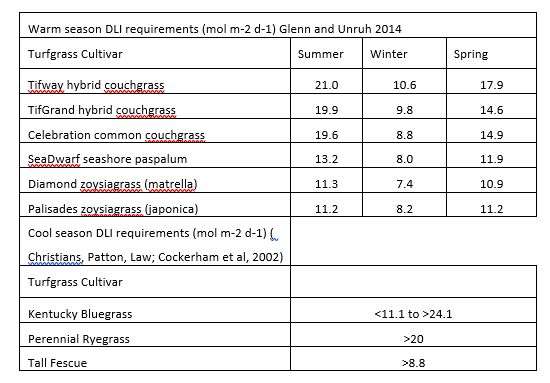 DLI is the cumulative amount of photosynthetic light that is received each day. The DLI measures the number of moles of light (mol) per square meter (m-2) per day (d-1), or mol·m-2·d-1. The DLI can have a big effect on root and shoot growth with variations existing between C3 and C4 grasses and also between different cultivars.

PAR (Photosynthetically Active Radiation) is a region of the electromagnetic spectrum (400 to 700 nm) that promotes photosynthesis.

PPF (Photosynthetic Photon Flux) tells us how much PAR a light source emits. PPF does not measure PAR, but it tells you how many photons within the PAR region are coming out of the light source every second.

PPFD (Photosynthetic Photon Flux Density) measures the number of photons within the PAR region every second. If you have a PAR meter, it is reporting PPFD (μmol/m2/s) measurements.

So what are the key differences between HID and LED lights?

Over a year the output of HPS lamps can degrade by as much as 10-15%. As this happens, the spectrum shifts toward the poorly utilized Green/Yellow range. LEDs last for at least 50,000 hours with less than a 10% drop in output whilst having little or no shift in the spectrum.

Creating light with HID lamps is very efficient. HPS lamps run as high as 1.7umol/j (#photons out / joules of energy in), but directing that light down to the area where it is used is not efficient, and requires a reflector. As the very best reflective materials have only 95% total reflectivity, this means that every time light strikes the surface, 95% reflects off and 5% absorbs and is converted to heat.

With a large diffused source like an HID lamp, it has many reflections. With each reflection, you lose at least 5%, so even the best HID fixtures you only have an efficiency of 85% or less. That means a 1.7 mmol/joule rating of an HPS lamp is effectively 1.45mmol/joules. Since LEDs are directional they do not require reflectors.

No cooling necessary and consequently no turf burn.

Turf absorbs light and uses the energy to strip the hydrogen out of water. It then combines this Carbon Dioxide in the air to create plant material. Turf has several pigments that can absorb light and the most important of these is chlorophyll.

Turf converts incoming light into chemical energy and it does this by using chlorophyll to absorb only the blue and red wavelengths of the spectrum. 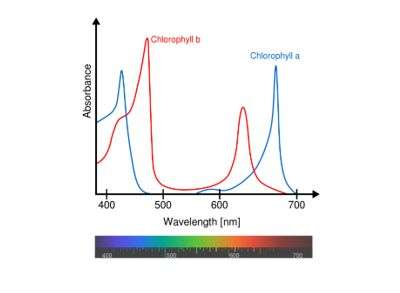 How do plants use light?

The key to using lights for turf health is to know how the turf uses it! As the above shows, there are two forms of Chlorophyll (Chlorophyll A and Chlorophyll B). Each has absorption peaks in both the Red and Blue spectrums, and both reflect yellow and green. While the green/yellow bands can be absorbed by other pigments, over 50% of this spectrum range is reflected away and/or poorly utilized.

Blue light helps regulate the opening of stomata and acts to inhibit etiolated growth. Turf grown under blue light has smaller leaves and shorter stems. Many LEDs for plant applications emit at least a small amount (such as 10-20%) of this.

Plants appear green because they reflect and transmit slightly more green light than they do blue or red light. Chlorophyll  absorbs green light poorly. Green light is sometimes stated as not being useful to plants for photosynthesis. However, it is still moderately effective since other pigments will absorb it and use it for photosynthesis.

Most LED arrays emit a high percentage (often 75-90%) of red light and this is absorbed well by chlorophyll. Red light is the most efficient waveband for photosynthesis but turf can become etioliated in the absence of other light wavelengths. The graph below shows plant absorption over the PAR spectrum range. Absorption around the green/yellow boundary is as low as 30% and from 620 (range/red boundary) to 520 (Blue/Green boundary) it is under 50%. Other less efficient pigments can absorb and utilize this spectrum range. 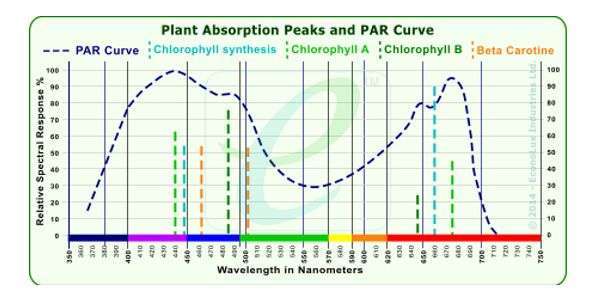 Metal Halide differs from HPS in the fact that the spectrum is produced by individual Metal Halides. When these are heated they turn to gas and emit light. Metal Halide lamps have  favoured the blue end of the spectrum. As the lamp light gets “warmer” in colour and generates more red light it gets less efficient, more expensive, and degrades faster. As you can see from the graphs they still produce minimal amounts of far red at the critical 675nm Chlorophyll A peak.

LEDs are the only lighting technology that can be designed to meet specific light spectrums for plants.

The graph below shows a standard HPS spectrum. You can see from these graphs that most of the HPS spectrum is in the area of the lowest plant absorption. 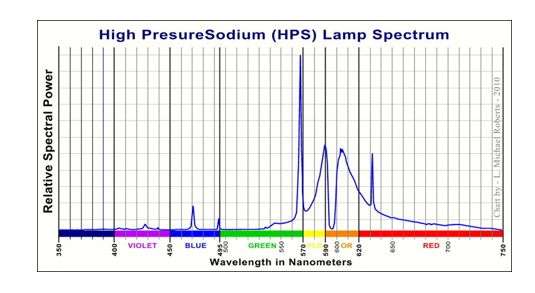 Individual LED chips produce very narrow spectrum bands. As a result LED turf grow lights can be mixed to deliver an exact spectrum giving the best possible result. This ability to deliver the frequencies that turf uses, at very a high efficiency and with the use of 30-40% less power has lead to the increase in LED popularity.

Photomorphogenesis is how different spectrum cause changes in turf characteristics such as leaf and stem size, shape, etc..). The main influence on this is the ratio of Red : Far red. Under normal conditions, the R : FR ratio is constant all year round, averaging about 1.15 (Smith, 1982), but in reality the R : FR ratio can fall to as low as 0.7 at dusk. One result of photomorphogenesis is the shade stretch response due to shade having a higher proportion of Far Red (FR) than is found in direct sun. This means that under trees or in shade, turf will begin to stretch and become etoliated. This results in a reduction in chlorophyll content and leaf thickness with the turf yellowing off.