How to manage flooded turf? 25 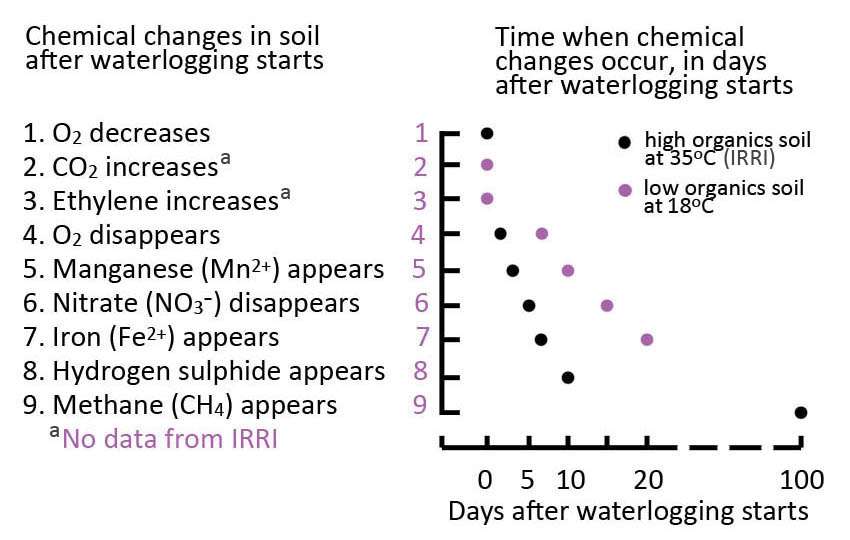 How to manage flooded turf?

We have put this together on how to manage flooded turf. With recent flooding having had a major impact on the turf production areas and sporting venues throughout NSW and VIC this will hopefully help get your turf back as soon as possible. The key to any management plan is planning. Things such as being isolated due to road damage will all have an indirect effect on recovery so taking remedial action before flooding occurs can have a dramatic impact. Crucial to this is you need to know what happens when flooding on turf happens as a lot of changes to the soil chemistry occur when flooding happens. The header image is courtesy of Setter and Belford (1990).

In its usual state soil contains plenty of oxygen to enable microbial respiration and organic matter decomposition. When soils become flooded, oxygen diffuses from the water into the soil surface and forms a thin layer of oxidized soil. Underneath this is a thicker oxygen deficient layer. Two by products of flooding and the subsequent oxygen deficiency are the production of Methane (CH4+) and nitrous oxide (N2O).

Once turf is submerged soil oxygen begins to decline and root hairs to begin to die. Although no definitive data is available, testimonials for dormant turf indicate that most can survive considerably longer than 4 days when flooded. This can be far from the case with non-dormant turf.

As the water covering the turf increases in depth, the potential for turf injury increases. The good news is that if the leaf tissue is above the water line the turf will probably survive. In areas where the turf is completely covered the situation isn’t so good.

Within a day of flooding, high organic matter soils become oxygen deficient. As a consequence of a lack of oxygen and sunlight, photosynthesis is reduced, respiration rates increase and side way rooting increases. It is worth noting that flood waters are inherently good at flitering out light which is required for photosynthesis. This is a direct result of dissolved organic material such as humic acids and particulate material such as silt.

Hindsight is a wonderful thing but if you have time there are a number of options you can consider in order to prepare for flooding and give your turf areas a better chance of recovering.

How to manage flooded turf – preparing for whats to come.

Here are a few tricks you can adopt to try and increase the chances of turf survival. The key is doing these before flooding occurs as afterwards it is too late. Firstly, Trinexapac-ethyl (Amigo® 120) can be applied at a high label rate before flooding. This significantly slows turf growth, respiration and leaf etiolation.

Secondly, diseases such as pythium root rot on cool season turf and ERI fungi on warm-season turf can thrive under waterlogged soil conditions. As the soil will be saturated after flooding you will not be able to apply or water in any fungicide. Consequently, it is far easier and more effective to apply preventative applications before flooding using for example Grenadier® (fosetyl aluminum) or AzoForce® (azoxystrobin). Using chemicals such as these gives you around 21 days protection. This is great for your piece of mind in a very stressful period and allows you to get on with other things without worrying about these diseases.

For the warm season and C4 grasses, the champion performer is seashore paspalum. This is followed by Couch, zoysia. Australian buffalo grass varieties fall somewhere in the middle.

How to manage flooded turf – The aftermath

Removing all the rubbish and sediment off the surface is the first step to repairing a surface after a flood event. Not only is this important from a safety perspective it also helps get sunlight to the turf canopy.

Be aware that any traffic over the surface at this stage is highly likely to damage the soil structure and create future issues. Waiting to mow until flooded areas dry also reduces the risk of damaging wet, muddy areas with mowers.

Also the weakened stressed turf is highly vulnerable at this stage to pest and disease activity.

As soon as waters recede aim to apply nitrogen as this can dramatically reduce the impact of waterlogging. The correct timing of nitrogen application on waterlogged crops can also significantly increase recovery rates.

If an ammonium-containing fertilizer (urea, or ammonium sulphate) or manure is applied shortly before a wet period, losses will be minimal because little nitrification to nitrate will have occurred (nitrification does not occur in saturated soils and will not resume until soils dry and become aerobic).

Nitrogen fertiliser can be added as granules or liquid:

Liquid fertilisers can supply nitrogen directly to the leaves and crop canopy to replace nitrogen normally supplied from the soil, and can therefore be applied at any time.

As turf managers there is a lot we can learn from horticultural and agricultural industries when it comes to flood mitigation strategies. All of the following have been shown to reduce damage. This doesn’t mean that they will stop it but in certain situations they may help with recovery.